Last weekend, I exhibited at London Super Comicon 2015 and it was fantastic!

The more I pursue comic book making, the more rewarding it has become. 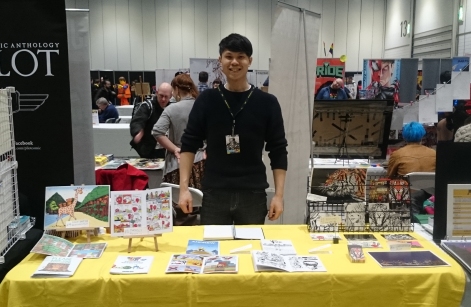 This time I had 5 of my self-published comics on the table:

I had new Tiger prints in addition to my London skyline and Monkey print. It was a good day and if I didn’t spend what I earned, I would have covered the table & lunch costs. However, I bought loads of cool stuff instead! If you’re an aspiring to work in comics or illustration, I really recommend going to a comicon. At LSCC, as it focuses on the artists and comics, you’ll be able to meet some of the best artists in the business and ask them questions as well as looking at their work.

As my 2nd year at LSCC, I am really liking going to this con. The main thing different this year was that there was no Friday event as in drinks for us comic book guys to meet and chat. Thoughtbubble has a mid con party for us all to meet and hang out while not manning our tables. Although it was very busy for me to get round, I managed to see a few artists I really wanted to meet and say hello to.

These included John Romita Jr, Lee Bermejo and Adi Granov. (If you’ve never head of these guys, Google them!), I even bumped into Johnny Vegas which was awesome! I had a great time at the con both in terms of sales and meets. 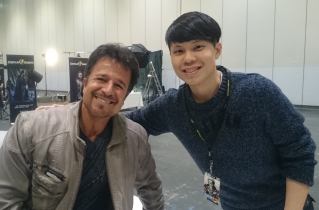 Managed to meet John
Romita Jr before he took off!

I’ve been to quite few cons now and I really like the social side of them. (Artists usually work alone at all kinds of random hours of the day.)

There’s the customer side, where I get to talk about my comics and see people’s honest reaction to my work, which is really useful feedback as how I can do better. It’s really rewarding to see someone enjoy something I’ve spent months working on and getting into a story in a fictional world I’ve created. I even made contacts with people interested in my freelance illustration work.

And then there’s the artist side. It’s a nice community where we can all talk geek! Meeting artists whose work inspired me in the first place, artists whose work keeps inspiring me push myself and indie artists who inspire me to move beyond stereotype and cliché, always trying to do something new.

As well as this, I always have a great laugh. A couple asked me to draw Gizmo, who I’ve never drawn before, which made them chuckle.

My most popular comic that sold the most was Fwendly Fwuit. If you like it, you’ll be excited to know that I’ve been working on a sequel, more deets to come soon…