So. The last year and a half I’ve been working on a comic book project called, ‘Mr Yang fights aliens’.

Here is the blurb:

By day, Mr Yang is one of those deadpan, dry but hilariously blunt, strict teachers we all had when we were young.

At night, whilst trying to balance marking with his social life and sleep he is rudely awakened by aliens kidnapping a homeless person in his local Peckham neighbourhood. After bothering to get out of bed to investigate, what he discovers threatens the survival of the human species and mother nature itself.

Mr Yang and a pupil he teaches must fight their way out of a UFO ship to escape being dissected by aliens. 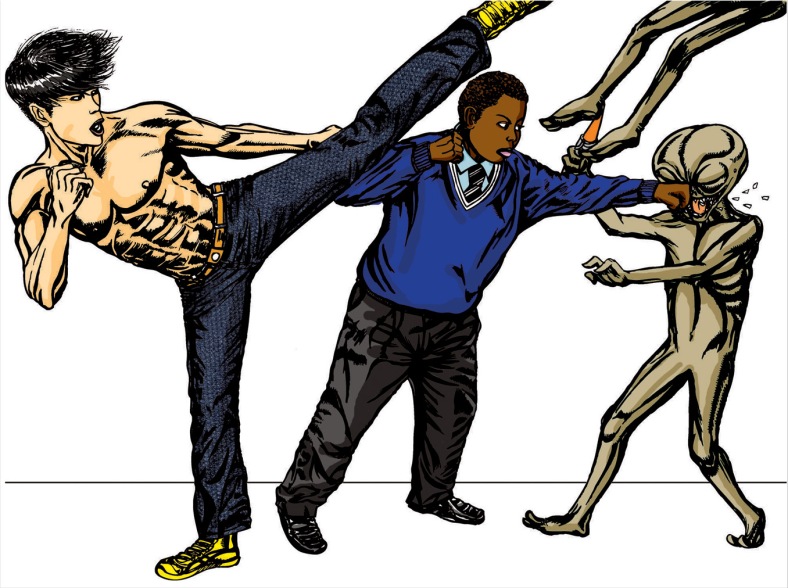 Mr Yang and a pupil beat aliens wanting to dissect them!

The humour is aimed at an older teen/young adult audience.

At the moment, I’ve finished all the art, and once I can get funds for it to be coloured by Joel Benjamin (http://www.joelbenjamin.co.uk/) it just needs lettering and printing.

As colour printing is expensive it will be definitely be available for digital download when it’s finished, but I would like to check some print options too.

There’s nothing like holding and turning pages yourself, rather than it being digitally fed to you, but then again, there’s less tree choppage.

I’m hoping to self publish the book in a few months time, so see you then…